YouNique – Fine Craft Art & Design is an intimate and exclusive event that presents a world of high craftsmanship in all its artistic aspects. In the neoclassical setting of the rooms of Villa Ciani, a charming nineteenth-century dwelling overlooking Lake Ceresio at Lugano, the occasion is a byword for the exclusivity of the handmade, an emblematic illustration of art blending with craftsmanship, and a showcase for artisans passionately striving to create unique pieces. Visiting guests will embark on a journey that takes them through many lands and cultures.

A peculiarity that makes YouNique a one-off event in the panorama of exhibitions dedicated to craftsmanship is the actual presence of true Master Craftsmen of exceptional quality who exhibit their own artifacts. It is a truly winning combination that offers the visitor a truly special and high quality experience.

Starting with next edition, YouNique Lugano will be taking place in March, the month of spring and of rebirth, grasping the energy and the desire for creativity that permeates the air at that the time of year.

YouNique in Lugano takes you on a symbolic journey through geographical areas that have a great vocation for craftsmanship, where men and women have found ways to transform their passions into wonderful craftwork, standing out as outsiders in their own fields: whether that be in ceramics or glass, mosaic or inlay, bronze or marble, fabrics, self-produced design, tailoring, jewellery, shoes, watches, furnishings, etc

During the two days in Lugano, skilled master craftsmen, artists and designers will have the opportunity to show visitors, families and professionals in the sector, not only splendid artfully made artifacts, a true hymn to creativity, craftsmanship and experience, but also some of the fascinating work phases that the public rarely has the opportunity to see.

One of the innovations brought by the 2022 edition is a new payoff .

YouNique was “Craftsmanship of Excellence”, from today it is and will increasingly be also “Art & Design”

In reality, art and design within YouNique have never been lacking but required more space and visibility.

From this year visitors will be able to admire artists, designers but also galleries who will present their best pieces and their most established or trendy contemporary artists, a constantly evolving path that aims to make our homes and homes more beautiful and unique. spaces we care about most.

The “Special guest” of the 2022 edition of YouNique is Tuscany which, thanks to an important collaboration with Confartigianato Florence and Oma-Osservatorio dei Mestieri d’Arte, will be present with a representation of artisan excellence.

The exhibitors coming from Tuscany, will be recognizable thanks to the “YouNique for Tuscany” plaque.

The third edition of YouNique – Fine Craft Art & Design opens its doors to the exhibition SONO TAZZA DI TE! 100 smashing women designers, an exhibition conceived by the DcomeDesign association, curated by Anty Pansera – historian and critic of design and applied arts and Compasso d’Oro alla Carriera – and Patrizia Sacchi, communication designer, with a Swiss Edition to be held during the two days of the event.

There will be 20 creations by women artisans resident in Switzerland, which will be added to the exhibition of cups already displayed with great success in Milan during the last Design Week.

Completing an already fully satisfying exhibition is the first edition of the YouNique Craftsmanship Award, a prize for the exhibitor who best interprets the philosophy of the event.

Thanks to the high quality of what has been offered in these journeys, the event has enjoyed since its first edition the patronage and support of the City of Lugano and the favour of professionals in these fields.

The historical Villa Ciani has been chosen as location of YouNique – Fine Craft Art & Design because it’s one of the most interesting locations in Switzerland’s Ticino region. It’s situated in the city park of the same name alongside the extremely beautiful Lake Ceresio to provide a perfect backdrop for exclusive and captivating exhibitions and meetings.
The 24 rooms that make up the two noble floors, have different dimensions and are all decorated with frescoes, stuccoes and decorations. Each of them will be an elegant setting for the exhibition itinerary.

At YouNique 2022, in addition to the historical splendour of the Villa Ciani venue, there will also be an exhibition area at Palazzo Congressi, a modern and extremely functional structure that fortuitously physically borders Villa Ciani. A glass tunnel connecting the two locations means that YouNique will be able to grow in size and add to what it is able to offer, presenting an even more interesting and diverse exhibition path with a range of services that are all, so to speak, under one roof.

Villa Ciani and Palazzo Congressi, in addition to being the venue for the exhibition of artisans, artists and designers, will host the collateral initiatives of the event:

The cultural journey of the 2022 edition will be dedicated to the exhibition “Sono Tazza di Te! 100 smashing women designer” by the DcomeDesign Association

As well as this, there will now be space for such amenities as the bar with adjacent lounge area, and rooms for meetings and workshops.

The third edition of YouNique – Fine Craft Art & Design opens the doors to the exhibition SONO TAZZA DI TE! 100 smashing women designer, exhibition created by the DcomeDesign association, curated by Anty Pansera – historian and critic of design and applied arts and Compasso d’Oro for Career – and Patrizia Sacchi, communication designer, with a Swiss Edition to be held during the two opening days of the event.

The call launched to Swiss artists, artisans and designers to create a unique cup, which could become a collector’s item to be exhibited during YouNique Lugano 2022, had a great response.

There will be 20 creations signed by “artisan” women residing in Switzerland, which will add to the exhibition itinerary of the cups already exhibited with great success in Milan during the last Design Week.

In addition, a particular section will be dedicated to the potters of Vietri sul Mare and will be a preview of the exhibition that will take place in the spring in the frescoed, nineteenth-century hall of the Municipal Palace of Vietri sul Mare which in the eighteenth century was owned by the noble family D’Avossa.

Perhaps the awareness of combining this experience with the possibility of doing charity favors the surprising participation: the entire proceeds from the sale of the cups made by the Swiss artists will be donated to the Anna dai Capelli Corti association, for the “Return to work after cancer ”, a study on the problems of the process of reintegration into work of young women suffering from cancer at a young age.

The project will be presented within YouNique on Saturday 26 March at 3.00 pm in the meeting room of Palazzo Congressi

Here are the names of the 20 selected artisans:

After the success of the last edition of the Salone del Mobile in Milan, the exhibition SONO TAZZA DI TE! 100 smashing women designer, organized by the DcomeDesign association, curated by Anty Pansera – historian and critic of design and applied arts, Compasso d’Oro Career Award 2020 – and by Patrizia Sacchi, communication designer.

The exhibition presents about 70 pieces signed by as many women designers, or rather “craftsmen”, masters in the use of the most diverse materials, who have released their imagination to give life to the most disparate types of cups, making them become objects of desire.

Yes, because the title plays precisely on this ambiguity; SONO TAZZA DI TE! mimics the classic phrase “Sono pazza di te!”: “I’m crazy about you!”, meaning the passion, the curious and brilliant spirit that characterizes female creativity which, in this case, is released on a commonly used object, a “simple” cup in fact …

The cups on display represent the subjectivity, personality and eclecticism of the craftsmen involved, primarily in the use of the most different types of materials. From the more traditional ceramics, declined in forms and different manufacturing techniques; from glass and mosaics, passing through different types of papers and even metals such as silver and steel; marble and fabrics (loom, crochet, embroidered) up to recycled plastics and materials, without forgetting the use of the 3D printer.

The event, promoted by DcomeDesign, is sponsored not only by YouNique Fine Craft Art & Design, but also by the Fondazione Cologni / Mestieri D’Arte, the Plart Foundation, CNA-National Confederation of Crafts and Small and Medium Enterprises, AiCC – Italian Association of the City of Ceramics.

Association for the promotion and dissemination of female creativity through the conception and realization of exhibitions, events and research of female designers in the international field.

The research of a historical nature, aimed at the study of already known female figures and the enhancement of others less known or still almost completely unknown, is accompanied by social design interventions. 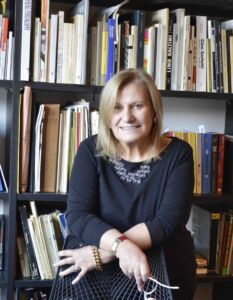 Research in the field of “feminine” design culture goes hand in hand with that of “craftsmen”, masters in the use of the most diverse materials.

As well as being co-founder of the association, the president of the association is Anty Pansera, critic and historian of design and art, awarded in 2020 the Compasso d’Oro Award for Career, since 1954 the most authoritative design award in the international arena

Founded in 2015 within the Senology Center of Italian Switzerland (CSSI) directed by Prof. Dr. med. Olivia Pagani, under the guidance of Gabriella Bianchi Micheli, psycho-oncologist, the association aims to achieve the following objectives:

To confirm the social attitude that characterizes the YouNique event and DcomeDesign, the entire proceeds from the sale of the cups made by the Swiss artists, who will answer the call, will be donated to the Anna dai Capelli Corti association, for the “Return to work after cancer ” project, a study on the problems of the process of reintegration into work for young women after cancer treatment, an important challenge especially for women, basically more fragile on the labor market.

Awarding of the prize YouNique Award 2022, dedicated to the exhibitor of the 2022 edition who best interpreted the spirit of the event, in the presence of the jury and the sponsor Locman

Presentation of the “return to work after cancer” project, organized by the “Anna with short hair” association, the charity project to which the fundraiser linked to the cups of the exhibition “I am cup of you!” Is dedicated

During the two opening days of YouNique Fine Craft Art & Design, in the two locations of Villa Ciani and Palazzo Congressi, it will be possible to purchase the exhibits and admire the artisans at work in the creation of their wonderful artifacts

We use third party cookies that help us analyze how you use this website and to integrate third party services (maps, 360 ° images, videos). These cookies will be stored in your browser only with your consent. Disabling some of these cookies can affect your browsing experience.
Necessary Always Enabled
The necessary cookies are absolutely essential for the proper functioning of the website. This category includes only cookies that guarantee basic functionality and security features of the website. These cookies do not store any personal information.
SAVE & ACCEPT